Wokingham Borough’s Draft Local Plan is open for consultation until 20th March 2020. Of the many sites suggested to the Council, the number has been whittled down, with most of the housing planned for a New Town in Grazeley, to the southwest of the Borough. Some smaller sites have been included, however, and two of these are in Charvil. One is for the complete development of the Land to the west of Park Lane, where 25 dwellings are currently under construction – a total of 100. The second site is the area of land to the east of Park View Drive North, which should accommodate at least 85 homes. This site is controversial as it is open farmland and part of it is in Flood Zone 3, the most likely to flood. If you would like to take part in this consultation, the link is https://www.wokingham.gov.uk/planning-policy/planning-policy-information/local-plan-update/ 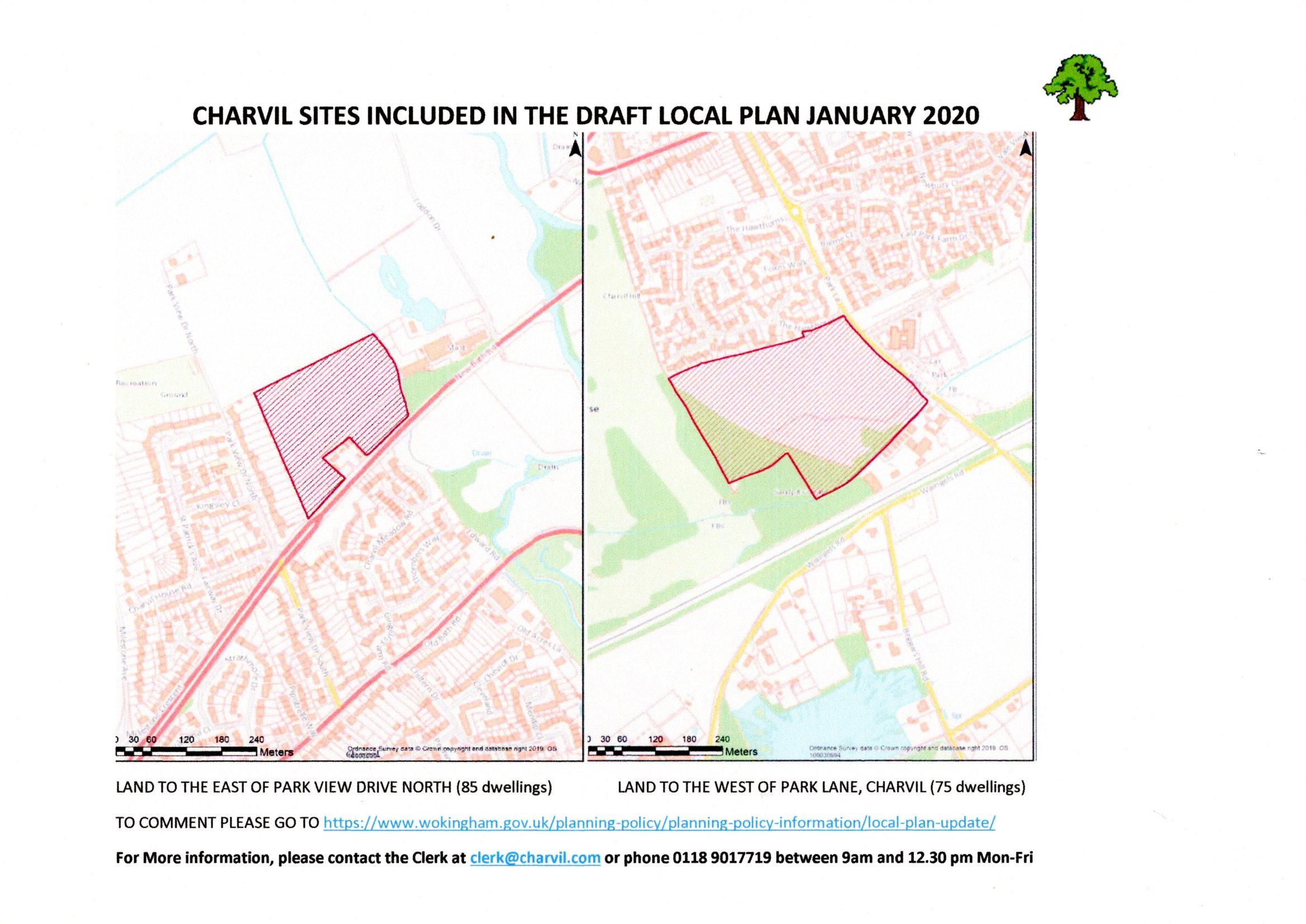 The Parish Council is aware that there is some confusion as to its position regarding local sites included in the list in January. We hope the following helps to explain its position.

When the original Call for Sites for the Local Plan period 2026-36 were published in 2016, Charvil Parish Council responded to  those put forward at that time, including the sites east and west of Park View Drive North, land west of Milestone Avenue and the parcel of land currently being developed on Park Lane. To all these sites, the response was that there were major concerns about infrastructure, loss of countryside, and in some cases flooding (although only a small part of any of the sites was in the worst flood zones).

The position changed somewhat with the granting of permission for the 25 homes on Park Lane, because the view of the Council was and is that it would be impossible to defend any further applications on that site, and that it would be better to willingly accept some housing there, in the hope of working with the Borough to improve infrastructure, than to oppose everything blindly, and having developments imposed on us. Basically, the Council feels that whatever happens, there will be more development on this site, and our greatest chance of getting anything for the community was to have the site included in the Local Plan.

Consequently, in the Homes for the Future Consultation in 2019, the Parish Council stated that it would be willing to support the Park Lane site to be included in the sites for the Local Plan.

At no stage did the Parish Council ever stop opposing the other sites in Charvil, but were also led to believe that there was not much likelihood of any development in Charvil; indeed, in the previous Local Plan period, it was seen as a “limited development location” due to its lack of facilities and poor infrastructure.

It was, therefore, a big surprise when the land East of Park View Drive North was included, and the Parish Council intends to respond to the consultation, objecting strongly to this site’s inclusion.

If the Parish Council is unsuccessful, then it will work with residents on its Neighbourhood Plan, to try to influence how the development takes shape and to improve and extend facilities as best we can.

This may be disappointing for some residents, but we were made very aware from the beginning that the northern parishes of the Borough would not avoid substantial development as it did in the previous plan period, and there is much relief in the wider area, that it was not selected for a new mini-town as was first mooted in 2016/17.

We would strongly encourage you all to respond to the Local Plan Consultation either electronically, or by post. Everyone should receive a leaflet in the next two weeks to explain the process, or alternatively, follow the links below:

Check back soon! All the Charvil Parish Council news and information will be posted here, so that you are always up to date!!