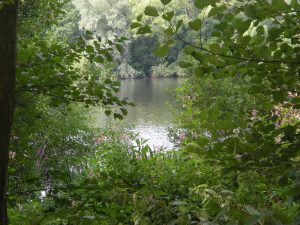 Experts have recognised two public green spaces in Charvil as havens for a rich variety of wild animals including birds, insects and otters.

These beauty spots measure almost 42 hectares in total and are managed by Wokingham Borough Council, with support from Charvil Parish Council, as part of Charvil Wildlife Reserve.

Teeming with life and open to everybody

TVERC’s teams visited several times and were impressed to note that several wetland bird species, including bitterns, were staying over winter.

They found the sites are home to several rare and sometimes colourful bee and wasp species. These are generally not aggressive towards people and are crucial for balancing the wildlife population by preying on smaller insects.

The experts also praised the high level of public access as the reserve boasts an extensive network of footpaths. Visitors can follow one of six routes ranging between 6.3km (3.9 miles) and 1.4km (0.9 miles) to walk around either the entire site or one or more of its five lakes.

Additionally, otters have returned after an absence of about 20 years, in part thanks to the hard work of the council’s countryside management team and the installation of artificial holts.

The reserve includes the lake area immediately to the south, also managed by the council, and another lake to the east which is managed by the Berks, Bucks and Oxon Wildlife Trust. These were already recognised as a Local Wildlife Site.

The council is about to install eight information boards at the entrances off Park Lane, where there is a car park, and Old Bath Road and Vale View. These carry a QR code allowing visitors to read more in an online booklet of  local wildlife.

The signs also explain the variety of species in the area, including the grey herons which breed on the wooded island on the southern lake while gadwall and smew, two nationally important types of wildfowl, gather here in winter.

Cllr Ian Shenton, executive member for environment, sport and leisure, said: “We’re immensely proud of this achievement. It is a testament to the hard work our officers, partners and volunteers have put into making the site a welcoming, hospitable place for both our borough’s wildlife and the people who visit to enjoy it.

“It hasn’t happened overnight but is the result of almost 25 years of good management including coppicing areas of woodland, creating new reed beds at the edges of lakes, installing holts for otters and leaving plant cuttings for insects to make a home in.

“Charvil Meadows is also managed through traditional methods like hay cutting and grazing to conserve the grassland and has never been ploughed in the conventional sense. Our approach, in short, has been to give nature the chance to take its course and this has paid dividends.

“We hope this designation will encourage more residents to visit and enjoy the treasures they may not even know existed on their own doorstep.”

The reserve lies on the River Loddon’s flood plain and boasts two nationally rare plants: the beautiful Loddon Lily, which flowers in the spring, and the Loddon pondweed. Additionally, BBOWT’s lake is home to wading birds like oystercatchers and the common tern.

Supporting green spaces across the borough

The council recently began replanting Charvil Meadows with white elm trees, which are resistant to Dutch elm disease, as well as a 200m hedgerow. This is part of its drive to plant 250,000 trees across the borough to improve people’s health and the environment.

It took over its portion of the reserve, previously a series of gravel pits, in 1998 and created the country park to serve new housing.

Check back soon! All the Charvil Parish Council news and information will be posted here, so that you are always up to date!!